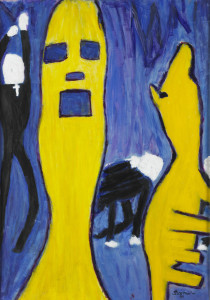 My military stint in D.C. bordered on Twilight
Zone lunacy.
Federal agents shadowed me. There were 3rd
degree interrogations by the C.I.A. as well
as background checks, psychological tests,
interviews with the Pentagon’s assorted
military brass.
I was just a draftee. They wanted to train
me for a job that required a Top Secret
security clearance, absolute loyalty, and at
least a year of specialized and complex
studying.
Better than ‘Nam & getting shot or
bombed. I was against their war. I resented
being a prisoner. It was that or jail. D.I.A
was better than sitting in a cell.
I lived off post in a downtown D.C. flop
not far from the White House.
I couldn’t live on post with all that
spit and polish.
It was a sleezy cluster of backstreet dives
and dumps, by the Greyhound station,
filled with cheap rooms, pawnshops,
seedy bars, strip joints, porno book
stores, winos, druggies, muggers, pimps
and whores.
On army pay it was all I could afford.
Below the Mason, Dixon line it often
was too hot to sleep. I sat one night on my
tenement rooftop smoking cigarettes, sipping
Jack hoping I would crash. I had to get up
early, catch a bus to my post, change into
my class A uniform at the barracks, report
for duty, study photo images shot from space,
try to decipher what they meant in the scheme
of things.
Suddenly military choppers filled the air.
You couldn’t do this in Chicago, the buildings
are too tall.
They swept the midnight streets with their
spotlights.
They circled, crisscrossed, went back and forth.
Below them was a swarm of cops, chasing
through the deserted blocks.
Five floors below and two blocks down, I
spotted the Running Man – that’s how
I always thought of the guy I saw futilely
fleeing for his life – arms pumping, head
thrown back, chasing back and forth like
a rat in a trap. He was a husky man, athletically
built, dressed in a gray, three-piece suit.
Was he a saboteur? A spy maybe?
An informer perhaps? He didn’t rob a
Seven/Eleven to create all that
commotion.
I wanted him to get away, drop down a
sewer, disappear behind a secret door.
I wanted him to do a vanishing act. He was
running hard, but he was running out of gas.
Was I rooting for the underdog? – Maybe,
but we are all Running Men aren’t we?
Running for our lives, running from our lives,
running from the Man, running from death,
which will get us in the end.
Suddenly the choppers flew away.
The cops went away.
There was nothing about the Running
Man in the news the next day. 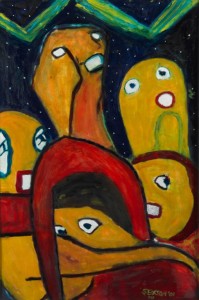 Artists live where all dreams end. Truth, Illusion are a dance of apparitions. You try to capture them. Smoke and mirrors are what you usually get – sometimes life’s magic.

I remember the story Henry Miller wrote about the angel he painted quite by accident. I never painted an angel. Maybe I’ll find one hiding in my canvas as Henry did. An angel today, a devil tomorrow, nothing unusual for an artist’s studio. That is the sort of place one goes to ponder good and evil and to confront that meeting between thought and instinct, peace and violence, greed and giving, which we all share if we dare.

After decades of war and recession, discord and intolerance, this exhibit reflects upon the angst of those times and the hopes and dreams for better times to come.

Slum streets, cracks in the concrete to break
your mother’s back if you don’t watch your
step.
But you do watch your step. The slum taught
you early on how to live in a war zone.
Your mother’s back will break anyway, as well
as your father’s heart, and your siblings’ spirits
and any dreams you may have had about living
a better life.
Slum days – tumble down tenements, rubble and
weeds, hunger, danger, misery, poverty.
Slum nights – gang bangs and drive bys,
loneliness, helplessness, hopelessness.
Slum delights – not very many, in fact hardly
any. Not until I got into a television contest
and answered a number of extremely simple
and useless questions which any moron could
have answered and won millions of dollars –
plus saved my true love from the neighborhood
gangster/drug lord/pimp master, just like in
the acclaimed novel (Q&A) and the blockbuster
movie made from it which was a big crowd
pleaser and sold lots of popcorn and won
many Academy Awards and made everyone feel
better about poverty except the poor.
Well OK, that story is impossible. I got out
of the slums and made my billions because I
eventually discovered, when I was fifteen,
that I was born with a brain that rivaled the
greatest living scientists and mathematicians,
and Harvard and Yale and Princeton and Brown
and all the ivy league schools offered me
scholarships to study with them. The rest being
history of course with the money I made from
technology and engineering.
I’m kidding. I made my billions through my
athletic talents – boxing champion (like Rocky)
basketball superstar, football hero, baseball’s
“best player.”
Yeah right.
Just like that movie I’m pulling your leg.
What would help me and my friends get out of
this ghetto is a raise in the minimum wage.
That would be a miracle.

“Would you like to dance?” The voice of Solo roused Stiletto from his dream world. She was suddenly seated next to the Junk Bond King sipping her Champagne and staring challengingly at him.
“I don’t dance standing up Chiquita.” The baby faced billionaire stared back at her and grinned. “What I do is the Swim. One partner on top, the other on the bottom.”
“Let’s test the water.”
Solo got up and walked out onto the dance floor. The young conquistador smirked and followed after.
It was like watching a swan mate with a monkey, or a goblin chase a ghost, or a devil chase an angel through the fires of Hell with his pitchfork. The Junk Bond King, who was tall and gawky, slashed menacingly at the air, determined, it seemed, to sly the beautiful creature bef0re him. Solo eluded his lethal blows, weaving and feinting and twirling in and around him.
The crowd began to clap. They encircled the clashing couple, one who whirled like a dervish, the other who stalked like a monster. It was a horror show and yet it was beautiful and they raged against one another in dazzling disorder, eyes riveted, mouths twisted, with passion? defiance? It didn’t matter. Stiletto knew that he had lost her.

Doors in the rain, locked, lonely, all the same, where the endless night never sees a glimmer of daylight, and life falls through fate’s cracks like a vanishing act.
“We see death’s door at the end of every corridor. Before we go through that one we should open as many of the others as we can.”
Death’s door. That was the only one left down Stiletto’s corridor. Or so it felt. He sat bundled up on his terrace, the city sparkling below him with its panorama of Christmas, and read in the papers about the marriage of Solo and the Junk Bond King on Christmas Eve in a little town in Guatemala which no one had ever heard of.
“Life’s road is a scar, cut by a butcher.”
Solo was a teacher there, according to the article, who came to Chicago to visit her childhood friend on a holiday. The woman, Maria, was a dress designer who wanted to establish her fashions in America. She was living in poverty, illegally. Now Stiletto knew where she was going when he followed her that day and where Solo got her magnificent clothes. The Junk Bond King took care of Maria. He bought her a shop on Chicago’s Gold Coast, fixed up the legality of her residence. The Junk Bond King was taking care of everything. He was building a school for the town Solo came from and a hospital, and a factory where the people of the town could manufacture the products from his vast holdings.
Stiletto could read between the lines of the Cinderella story. The town had collectively raised money, just as the migrants had done for one another many times in his childhood to help the others and themselves. To send Solo to America. The beauty had done her duty. She had married money.
“Confined in my cloud prison,
Stiletto replayed Solo’s song in his head as he read, watched her dance again.
“I watch a rainbow arch across the heavens,
“Dreams shimmer through fate’s prism,
“I fall through life’s crystal ball

as he leaves the

while he smokes it

and enjoys the small

of the burning tobacco,

where he’ll go next,

to survive the blistering

shot from a gun,

is coming for him,

His comrades in arms,

abandoned by their country.

Dead on the sidewalk,

dead in the alley,

dead on the asphalt –

The night is a war zone.

You survive or you don’t.