Constant is the Rain 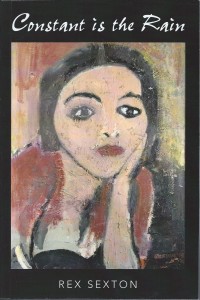 Praise for Constant is the Rain

“Relentless pessimism about the state of the nation infuses Sexton’s … accomplished poetry and short ﬁction … The title piece, about hard life and untimely death in the ghetto, introduces the book’s dark atmosphere: ‘Being and begetting, struggling and/ enduring … as gunﬁre crackles and sirens wail/ and her fate is sealed with cofﬁn nails.’ Sexton’s characters – Nowhere Men as much as Everymen – are war veterans, hobos, sex workers, and blue-collar employees facing job losses … His settings are urban wastelands. In ‘The Penworn Papers’ an impoverished artist recalls his degenerate life … in ‘The Gift,’ a Jewish satire redolent of Shalom Auslander, a young man reverts to emptiness in his old age … The palette is Edward Hopper’s, the ironic tone O. Henry’s. ‘Our Town’ playfully afﬁrms Thornton Wilder’s morbid vision through gloomy imagery. The poems (are) rich with alliteration, internal rhymes, assonance and puns … They have broader application, universalizing human depravity …Sexton’s talent for social commentary and character sketching marks him as – in a title he gives a character in ‘Chop Suey’ – the Modigliani of the Mean Streets”

“Earnest and emotional, Constant is the Rain embraces desperation in tone, subject, and even in diction. A yearning for meaning in a nonsensical world comes to shape much of the text, forming the image of a people and a country existing without any deﬁned meaning.
“Sexton’s poetry generally forms isolated scenes of hardship and makes up the bulk of the work. ‘Like cruciﬁxion crosses dangling weary ghosts,/ the telephone poles along the lost roads of America/ ﬂash past me.’ These images, producing small segments of reality, combine to show the complete picture of a fragmented people looking for solace in a world of hard truths. From the individual seeking understanding to the drug addict seeking a reprieve from existence, the characters are … easily recognizable and empathetic ﬁgures.
“Complimenting Sexton’s poetry is not only prose but his artwork … most impressive about the prose … is the continued attention to detail in diction and syntax … the result is a work accessible to all … that imparts a feeling that is for the people rather than simply about them.”