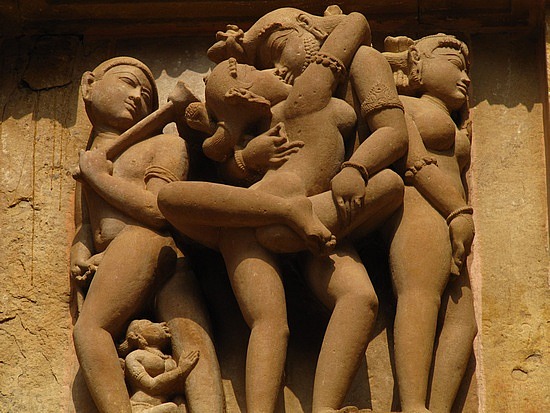 Statues at a Karma Sutra Temple in India

Any one who has been in one knows that a long distance relationship is challenging…very challenging. Karan and I are in our third year together and half that time has been long distance. We see each other every three to four months. We Skype every day but in the beginning we couldn’t even do that – no video support and super slow internet so we are grateful for any progress.

One of the obvious challenges of a long distance relationship is keeping the romance fresh. Now I’m not prepared to share my private life (completely) or offer advice but I am always observing and making connections as a way of managing my experiences. My observations have shown me the differences in how a man versus a woman handles long distance romance and that has led me to a larger observation of the cultural context of sex in the three cultures I have personal experience with: America, Dominican Republic, and India. But, I am getting ahead of myself…

Over this year plus apart, Karan and I have navigated as couple the murky waters of sex across borders. We are lucky in that the spark is not an issue. It has always been strong, almost kinetic, and not wavered. What has been more of an issue is the differences of how we manage sexual desires during the separation.

When I am with Karan, face to face, my desire for him feels almost insatiable. He’s a handsome guy, we are deeply in love, and I don’t get to see him every day so it’s easy to see why I feel this way. But even when we lived together and saw each other every day it was nearly the same. Even after the “honeymoon” wore off I still always felt a constant state of distraction when I was around him.

But when we are apart and the sting of separation has subsided, I shift and like a performer in a play, strip off my sexual self and save it for later, for when I will see him again. My sexuality recedes deep into the background, a hidden and unnecessary part of myself, saved for a rainy day. I hardly think about sex and avoid standing out thereby attracting the attention of men. For the most part I am successful in focusing on my kids and my business. I move through the world sexually anonymous. But every once in a while I get a glance, a smile and I realize I’m not as invisible as I hope to be.

It works quite well for me this way. I know I have a man who loves me and when I see him I will be able to shift selves again. But the challenge is that for Karan, he handles the separation in a completely different way. When we are together, I am more distracted but he is more grounded. Knowing that I am there centers him and allows him to focus on other things besides his sexual desires. But when I’m gone, when I’m out of reach, he is the one who is distracted. While I have submerged my sexual self to get through the time apart, his is in the forefront. An interesting play of opposites. Let it suffice to say that I have had to learn to balance them and clearly it’s working or we wouldn’t have made it this far…

But this whole experience has caused me to consider how sex, one of the most complex topics ever, is perceived culturally, or at least in the three cultures I have come in intimate contact with because of one of the most profound effects of my relationship with Karan has been the merging of sex with love, something we theoretically strive for but rarely achieve.

So here is my personal experience with the three cultures I have mentioned.

Our founding fathers were Puritans whose religious beliefs were restrictive to say the least. Sex was viewed as a necessary evil for propagation but sinful for any other reason, certainly not something to be enjoyed. And women in particular were seen as the most sinful so a woman who enjoyed sex was thereby… a witch.

Eve’s corruption, in Puritan eyes, extended to all women, and justified marginalizing them within churches’ hierarchical structures

As America grew, many cultures mixed in but our base remained this Puritan strain and we see it eek in different political movements as well as the culture in general. Despite the fact that we have a comparatively ‘open’ society when it comes to sex, we are overshadowed by guilt. Sex is seen as something dirty or at the very least something to hide. Everyone does it but no one talks about it and if they do it is with a guilty pleasure. Television shows often portray the American marriage as the one partner eager for sex (usually the husband) while the other puts it off. Eventually the assumption is the one put off will seek it out elsewhere.

Growing up, the message seemed to me that one should have various relationships to figure out what you wanted. During that time, a certain amount of sexual freedom was accepted, but, when you got married, you settled down and put your past behind you and sex became about your duty to your husband and for having children. A confusing message to be sure because at no point was sex valued as the ultimate expression of love. In one’s youth it was seen as a form of exploration, even acting out and later as a duty, sometimes even a burden, and a necessary part of having a family.

Because sex is a natural part of life but in America it is not culturally accepted as such (without guilt) then desires get suppressed which leads to them coming out in all sorts of other ways like infidelity, pornography, even perversity. 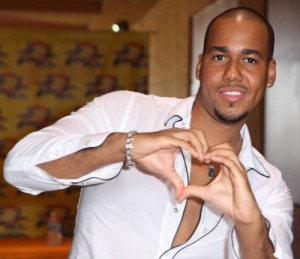 For an American, coming from a culture of repressed desires and an overshadow of sexual guilt, the Dominican culture feels like a breath of fresh air. There, sexuality oozes out of everyone, freely, openly. Sexuality is integrated into everything from the erotic dancing style, language expressions, fashion and of course, body language. There is no guilt whatsoever associated with sex, instead sex is seen as a pleasurable thing that doesn’t cost money (theoretically) and there is no reason no to do it. Men look at women boldly, seeing through their clothes with their stare, imagining sex with them. Women are greeted as “mi amor” (my love) or “mi vida” (the love of my life) even if they are talking to a stranger.

It appears to be a very romantic culture. The men consider themselves dominant, at least they act this way, but in reality, most Dominican men are powerless, they can not back up their proclamations, their big talk. Still, until you realize this, they all seem like Don Juan.

So I was swept away by this culture when I first came to it. As American I always felt out of place because I was raised to be very comfortable with my sexual side but I wasn’t interested in a series of partners. I was looking for a monogamous relationship that was sexually exciting and I wasn’t able to find it. Sex was exciting while I was single but as soon as I settled down it got boring. Being a very loyal partner, I stayed in these boring relationships for years…

So here I was in a tropical paradise where I was being promised just what I was looking for and I fell for it — hook, line and sinker.

What I then came to realize was that Dominicans will say anything, and mean it sincerely for that moment but when the moment has passed, they are on to something else. Love is promised because it is a doorway to sex but sex is not love for them. It is a fun exercise. The casualties of promising love are merely that, a means to an end.

After being married to man that had a double life for the entire time we were together, with his other family complicit in the subterfuge, I realized that loving a Dominican was toxic for me. I didn’t have the radar to keep myself on track. I feared I would only fall in love again and realize too late that the love was one sided. So I made a decision that while, at that time, my life remained in the Dominican Republic, my heart would never return. 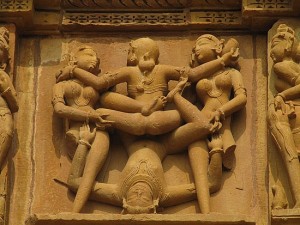 Sometimes I think God is a trickster because who could have predicted that I would meet the man of my dreams, from a completely different culture across the globe, right in my neighborhood but that’s what happened. I was fed up with Dominican love but it was still my home. Licking my wounds from my failed marriage, I was not in the market which allowed me to be open to getting to know Karan and a completely different culture.

India is a complex culture to say the least and so diverse that you really have to discuss its culture regionally versus nationally. Although outwardly India appears more sexually restrictive than the United States (and without question the Dominican Republic), India is the country of origin for the Kama Sutra, thereby having the richest sexual history of any nation. I can not speak of India as a whole but I can speak on how my future husband views sex and it couldn’t be more different than the other cultures I have spoken of.

For Karan, sex is an expression of love, one to be enjoyed freely without guilt…but just with your one and only true love. Sex is a powerful way to connect and not be engaged in merely for physical pleasure alone. Culturally, in India the role of sex is the opposite of my experiences in America. In India, or at least Karan’s part of India, there is no sex before marriage — there isn’t even dating before marriage. Instead, sexual desires are channeled into worship, family duty, and patience. Karan says that where he grew up, men and women couldn’t even be seen in public together if they weren’t married or direct family. The police would stop you and call the parents.

Once married, sex enters the relationship not only to have a family, but as a way to express love to each other. Sex is honored, explored and considered a positive part of a whole relationship — not the most important nor the least.

These are just observations, not conclusions or judgements and no culture is perfect. My relationship works. With Karan I feel safe with his loyalty to me. I am secure in our relationship yet it is in no danger of becoming boring which is a good thing 😉

« The Searchers
Constant is the Rain »