My Face to the Light: Alice Walker’s Thoughts about Christmas 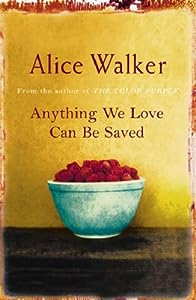 Cover of Anything We Love Can be Saved

As I was reading Alice Walker (best known for her book The Color Purple) collection of essays entitled Anything We Love Can Be Saved, I thought her ideas only represented me on an abstract – perhaps metaphorical level. I can relate to her situation only in certain aspects, others I can’t even begin to understand. In my opinion, she is rather centred around a purpose and she definitely has a leit-motif (the Goddess, for example), but, as I said, I don’t fully understand her situation, so I won’t be judging her for some linguistic clichés (I know I have mine, and I’m pretty sure each individual, social/enthic group or country has plenty as well!).

In any case, from the whole book, I chose an essay that I think is still very much current, even after fourteen years. It’s about Christmas and its sometimes empty, sometimes ideologically charged stories. First, the subtitle is quite interesting and very much poetic: “seed catalogs like paper flowers”.

For those who don’t know much about Alice Walker, in short, she is one of the strongest voices in African-American (women’s) emancipation and self-determination and she is also involved in projects that go beyond the United States’ borders (Africa, for instance – only in this book, there is a very interesting essay about conferences against clitoridectomy in Northern Ghama , entitled ‘You Have All Seen’. If the Women of the World were Comfortable, This would be a Comfortable World, and the ordeal Winnie Mandela has gone through as compared with Zora Neal Hurdston, entitled How Long Shall They Torture Our Mothers? The Trials of Winnie Mandela. The Stone we’ve come to throw – anyway, if you’re interested, here is some more general info about her).

As for many people who have been forced into celebrating characters and holidays that not only don’t represent them, but they actually depict their oppressor, there is no surprise Walker’s stand on Christmas is not at all the usual “Do they know it’s Christmas time” type (and yes, there is no snow in Africa – mostly, at least – and I’d say the locals couldn’t care less, as I’m not weeping over the fact the lion is not part of Romania‘s natural fauna). In fact, her true image of Christmas, she admits, came after she moved to the West Coast. Until that, her idea of Christmas was of “ritual killing” of trees (like the one with turkeys on Thanksgiving):

I was sickened by the thought of all those stumps, all those bleeding necks, and by the message given to children that it is okay to sacrifice living beings in order to celebrate the birth of a sacred person, Jesus Christ, who was himself against killing. (98)

Still, this was very different from her childhood view on Christmas. Growing up in a geographically, racially and socially disadvantaged area, namely that of the “rural black Southern community” (98),  she knew only one benevolent and generous white man – except for Jesus – and that was Santa Claus. Her memories of Christmas as a child are even more touching  as they are authentic and still vivid in her mind:

This was done with such enthusiasm and tenderness – and Santa’s rosy cheeks were described with such bemuse accuracy – that as a three-year-old one Christmas morning, I announced I’d actually seen him the night before, as he stole about the house, sampling the pies and cakes my mother always made and left out for him, and filling our shoeboxes and brown paper bags with apples, raisins, oranges, and nuts. (98-9)

Interestingly enough, the “presents” Santa gives these children are very similar to the traditional presents children would get after carolling in Romanian villages (especially nuts). Are there any other such traditions around the world? Is that only a sign of despondency, or something that lies deeper in the African-American soul?

Then, Walker goes on asking if the exactly reversed situation – if white children would too “once a year welcome a stealthily moving large black man into their sleeping houses in the middle of the night” (99), which is quite a difficult idea for many – white people – to cope with.

As she grew up and went to college she began to intellectualize what she has lived until then: not exactly slavery any more, but white ruling over black still very much vivid. She recalls the discriminations she faced as she was a child and her anger went towards her parents for worshipping Santa Claus:

Until I realized that, like the white figure of Christ, whom they also appeared to worship, Santa Claus represented an ideal person who was compelled to be white (in a society in which the country’s president, the mayors of towns, and the police were also white), and that their intention in accepting him was to help us all remember that there could indeed be an ideal white man, worthy of friendliness and tender regard (in a setting where not one white man was known to fit Santa’s merry, adventuresome, and undiscriminating description). (99)

In other words, the purpose of this imposed good-white-man was to instill “a degree of hope” (99) to the populations that had none, and were not supposed to have a real opportunity for a better life.

After Walker moved to Northern California, she began barricading herself from “the hectic shopping days that Christmas has become for so many” (99), doing anything but the usual Christmas activities. Then she discovered exactly what Christmas was: the winter solstice (celebrated on 21-22 December), “when the sun, having gone as far south as it ever gets, begins to move back north” (100), in other words, the light’s return on the Northern Hemisphere, as a friend of hers described it. Therefore, originally, the celebration had nothing to do with the birth of Jesus Christ:

Well, even if the supposition is a bit far-fetched – in the sense that I don’t think animals consider celebrations necessary, they follow their own schedule, but I’ve never seen them on a festival, such as us, humans.

In any case, this idea changed Walker’s whole idea and feeling about Christmas and the way she celebrates it, as well. Her usual way of celebrating (at least around 1997) is (was) going to the sauna, vegetarian feasting, music (making and dancing) along with her friends. What she denies without any space for doubt is killing, as she now celebrates the Winter Solstice:

For me, the excitement about the sun’s return begins to build several days in advance of the winter solstice, and my celebration consists of  a heightened awareness of the losing ground of winter, no matter how cold the days might be, and an intense expectation of the day itself, which, when it arrives, is greeted by my face turned up to the (if I’m lucky) sunny heavens. The days after are spent in quiet appreciation of the possibility of another spring (my favorite of all seasons) and thoughts of seeds and planting. I lie late in bed, thinking of the sun as of a long-travelling friend who is at last coming back home to me, my collection of seed catalogs covering me like paper flowers. (100)

Walker still admits of thinking about Christmas as Jesus’ birthday (sometimes), but she has lost all confidence in Santa Claus. It is actually for her a “rebirthday” – for the whole world, including the author herself.

I found this essay interesting in the sense that what is nowadays marketed as Christmas is mainly an artificial (mostly plastic) US/Hollywood invention that is being imposed on everybody – whether you’ve been actually celebrating it for a longer time than Uncle Sam himself (pun intended!).

What I’d like to draw attention on is that actual history of Christmas, connected not only with Christ, but with Mithra and the Saturnalia, and all that is not mentioned in morally correct histories of the Roman Empire and Beyond. Ask yourselves, before Christmas was imposed as a family-holiday, why was it forbidden for years – even in England!

What is Christmas to you? For me it’s more than a holiday and Santa, it’s the feeling of being with the family. I guess it depends on everybody, but for me it’s the ideal time to be peaceful and spend quality time at home. And play Santa too!